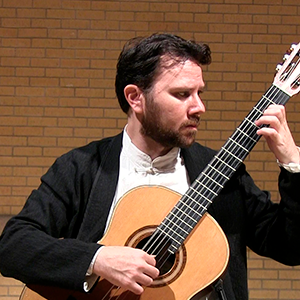 Mr. Nabeel began his classical guitar study in his hometown of Damascus at age of Eight. At age of Sixteen he was awarded the grade of Excellence in guitar performance at Solhi al-Wadi Institute of Music from which he graduated in 1997. During college years, Mr. Nabeel was active in performing and teaching the guitar at all levels and ages. In year 2003 he won the Moyen-Guitare lère Mèdaille Ascendante competition at the National Conservatory of Jordan in collaboration with the Conservatoire National de Region Ville de Boulogne-Billancourt, France. In 2017, he earned his master’s degree (M.M.) from the University of North Texas (UNT) in Guitar Performance under professor Thomas Johnson with a related field in Performing Arts Health under professor Kris Chesky.

His belief in interdisciplinary as a vehicle of good learning lead him to pursue the world’s first Ph.D. degree in Performing Arts Health at UNT College of Music. Mr. Nabeel presented the first epidemiological study on classical guitarists’ occupational health at the Performing Art Medicine Association (PAMA) international symposium (2017), and his most recent research activities include Music Performance Anxiety (MPA), and Musician Identity. Currently, Mr. Nabeel is a Ph.D. student and research fellow at the UNT College of Music. Mr. Nabeel is an active performer and has over Fifteen years of guitar teaching experience.