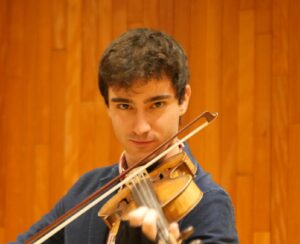 Luis Canosa is a young Spanish-american violinist. He started playing violin at age 8 with Raquel Rivera, and later continued his studies at the Centro Superior Katarina Gurska, with Egor Vasilenko and Erzhan Kulibaev, while at the same time studying with the great master Yuri Volguin. He was awarded the Talent Scholarship from the Karatina Gurska Foundation, and later perfected his playing in master-classes with other great violinists such as Viktor Tretyiakov, Natalia Likophoi, Natalia Prishepenko, and Sergey Teslya among others.

He has preformed in the most important halls across Spain, including both the Symphonic Hall and Chamber Hall of the National Auditorium, in the Auditorio Ciudad de León, Palacio de Cibeles, Auditorio del Real Sitio, Orive Hall of Córdoba, Galileo Cultural Center, Teatros del Canal, Auditorio Carlos III, as well as in numerous other countries, such as Steinway Society of Puerto Rico, Espacio Ars Buenos Aires (Argentina), Museo Diocesano di Brescia, Castello di Sirmione (Italy), Rector Palace of Dubrovnik (Croatia) and other stages in Ecuador, Germany, France and the United Kingdom.

He started teaching in 2014 as an assistant of Raquel Rivera, and has since taught both adults and young children alike. When teaching he aims to make the experience as enjoyable and comfortable as possible, teaching proper technique through relaxation, so that the student will be able to get a grasp on the joy that playing can bring, without unpleasant tension that hinders progress.